After several years Moldova is returning to be an important player in the essential oil B2B market.

During the USSR era, Moldova was one of the biggest producer of agricultural products from Eastern Europe. The good climate allowed large output of wine, fruits but also medical and aromatic herbs and oils. The Soviet republics used Moldovan plants and essential oils to produce perfumes, cosmetics, herbal teas, spirits, jams but also applying it widely in the Sanatoriums for massages and aromatherapy. During that period in Moldova, 10 factories used to produce annually 160 tones of etheric oils. Coriander, lavender, sage, mint, rose and fennel were grown on 200.000 hectares of land.

After coriander, lavender was the second most produced plant. Since Moldova has a cold temperate climate, it was necessary the creation of a new lavender variety resistant to that weather conditions. Dr. Murin Anatolii together with other scientific researchers generated a new Lavandula Angustifolia variety and named it “C90-Chisineovscaia 90” from the name of Chisinau, the capital of the Republic of Moldova.

As a consequence of the USSR collapse also the essential oil industry slope down: more and more fields started to be abandoned. Only few factories preserved the distilleries and continued to produce and to sell in bulk through new export channels inside the European Union. But because of high competition and low profits it was difficult to invest in innovation and in the renewal of the plantations; as a result the production per hectare and quality of the oils decreased. Being the country immerged in a considerable social, political and economic crisis, the only advantage came from the low labor cost.

Some foreign entrepreneur saw in all this scenario a business opportunity so they started to buy the cheap lands and to plant different types of etheric plants such as: dill, sage, rose, coriander but above all lavender. An example is the multinational cosmetic company Weleda which specifies on its own website that the lavender essential oil contained in its products is imported from Moldova. Furthermore, it is well known and it becomes more often that also perfume companies from France, Germany, Spain, Great Britain and Italy use essential oils from Moldova in their fragrances.

Nowadays new local businesses such as Aromenature are investing in this flourishing industry trying to revitalize it and the amount of essential oils sold wholesale throughout Europe is increasing year by year.

No products in the basket.

Your wishlist is currently empty. 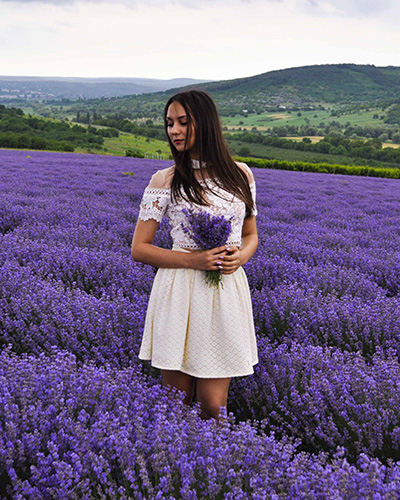 Stay Updated on all that's new. We'll send you info about new products, events and fairs.

We use cookies to ensure that we give you the best experience on our website. If you continue to use this site we will assume that you are happy with it.Ok